Shruti Haasan took to social media to share a picture of her younger self with the legends Kamal Haasan, Ilaiyaraja and Sivaji Ganesan.

The actress revealed that the picture was taken right after she sang ‘Potri Paadadi penne’.

She also added that the song was her first recording experience. 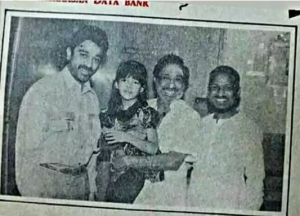 On the work front, the actress will be seen alongside Vijay Sethupathi in Laabam.