Actress Deepika Padukone joined Boney Kapoor and Gauri Shinde to launch the biography of the late actress and superstar Sridevi.

Titled ‘Sridevi: The Eternal Screen Goddess’, the book is approved by the late actor’s producer husband. 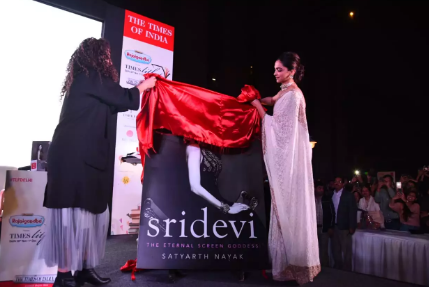 Kajol has penned the foreword for this much-awaited book. “I have grown up watching Sridevi’s superstardom on film-sets and her magic on the big screen. She is an institution of acting and will forever remain my most favourite icon. So happy Penguin gave me this opportunity to write this foreword,” Kajol had said in a statement. Earlier the book was titled ‘Sridevi: Girl Woman Superstar’.

Sridevi passed away at the age of 54 in February 2018 in Dubai. She passed away just before her daughter Janhvi Kapoor was to mark her debut in Bollywood with ‘Dhadak’.